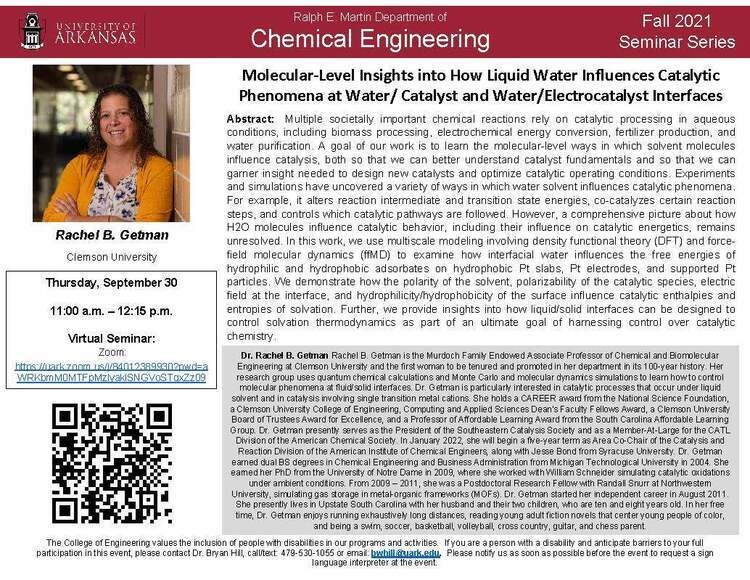 CHEG Fall Seminar Series: Insights at the Molecular Level of the Influence of Liquid Water on Catalytic Phenomena at Water / Catalyst and Water / Electrocatalyst Interfaces

Abstract: Multiple chemical reactions of importance to society rely on catalytic treatment under aqueous conditions, including biomass treatment, electrochemical energy conversion, fertilizer production, and water purification. One goal of our work is to learn the ways at the molecular level in which solvent molecules influence catalysis, both so that we can better understand the fundamentals of catalysts and so that we can gather the information needed to design new ones. catalysts and optimize the catalytic operating conditions. Experiments and simulations have discovered a variety of ways in which the aqueous solvent influences catalytic phenomena. For example, it modifies the energies of the intermediate and transition states of the reaction, co-catalyzes certain stages of the reaction and controls the catalytic pathways followed. However, a full picture of how H2O molecules influence catalytic behavior, including their influence on catalytic energetics, remains unresolved. In this work, we use multiscale modeling involving density functional theory (DFT) and molecular force field dynamics (ffMD) to examine how interfacial water influences the free energies of hydrophilic and hydrophobic adsorbates. on hydrophobic Pt plates, Pt electrodes and supported Pt particles. . We demonstrate how the polarity of the solvent, the polarizability of the catalytic species, the electric field at the interface and the hydrophilicity / hydrophobicity of the surface influence the catalytic enthalpies and the entropies of solvation. In addition, we provide information on how liquid / solid interfaces can be designed to control solvation thermodynamics as part of an ultimate goal of mastering the control of catalytic chemistry.

Rachel B. Getman is Associate Professor of Chemical and Biomolecular Engineering with the Murdoch family at Clemson University and the first woman to be titled and promoted in her department in its 100-year history. His research group uses quantum chemistry calculations and Monte Carlo and molecular dynamics simulations to learn how to control molecular phenomena at fluid / solid interfaces. Dr. Getman is particularly interested in catalytic processes that occur in a liquid solvent and catalysis involving single transition metal cations. She holds a CAREER Award from the National Science Foundation, an Award of Excellence from the Clemson University College of Engineering, Computing and Applied Sciences Dean’s Faculty Fellows, a Clemson University Board of Trustees Award for Excellence and a Professor of Affordable Learning Award from the South Carolina Affordable Learning Grouper. Dr Getman is currently President of the Southeastern Catalysis Society and Extraordinary Fellow of the CATL Division of the American Chemical Society. In January 2022, she will begin a five-year term as Regional Co-Chair of the Catalysis and Reaction Division of the American Institute of Chemical Engineers, with Jesse Bond of Syracuse University. Dr Getman received a dual bachelor’s degree in chemical engineering and business administration from Michigan Technological University in 2004. She received her doctorate from the University of Notre Dame in 2009, where she worked with William Schneider to simulate catalytic oxidations at ambient conditions. From 2009 to 2011, she was a postdoctoral fellow with Randall Snurr at Northwestern University, simulating gas storage in metallo-organic structures (MOFs). Dr Getman began her freelance career in August 2011. She currently lives in upstate South Carolina with her husband and their two children, who are eighteen and eight. In her spare time, Dr. Getman enjoys running long distances, reading young adult fiction novels focusing on youth of color, and being a parent of swimming, soccer, basketball, volleyball, cross country, guitar. and failures.